Yahoo! News Dubs iTamaraw Project as one of Promising Science and Technology Solutions 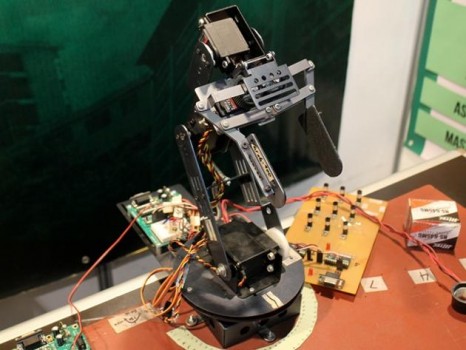 FEU Institute of Technology caught the attention of Filipino scientists and science enthusiasts during the recently held ExpoScience 2013. One of the College’s projects at the exhibit was included in the list of inventions dubbed by Yahoo! News  Philippines as promising science and technology solutions.

The promising new project was a Sensor Array Module-Controlled Robotic Arm (SAMCRA) created by FEU Tech Computer Engineering faculty member, Prof. Jamie Adrian Jamasali, M.E. CpE. The amazing part about SAMCRA’s movements and functions is that, thanks to an array of sensors and microcontrollers, they are controlled by hand gestures. The robotic arm and its gripper claw can also move along 4-axes, in three dimensions.

According to Prof. Jamasali, SAMCRA was his final output to complete his Master’s Degree in Computer Engineering, which he received last April. He added that, almost a year ago, the project was called Wireless Emulated Four Axis Robotic Arm.

Two other projects were showcased by FEU Tech: the Micro-Controller Based Room Management System Using Finger Print Scanner for ECE Laboratory and the Online Car Customization for Warpzone New Age Customs. The Room Management System was developed by students from the Electronics and Electrical Engineering department while the online car customization website was designed by Information Technology Education students.

The six other projects that made it to Yahoo! News list were the Mobile Operational System for Emergency Services (MOSES), the Disaster Risks and Exposure Assessment for Mitigation (DREAM), the Ovicidal/Larvicidal Trap (OL Trap), the RxBox, Plasmanoy, and the Data Hybrid Vehicle. The article from Yahoo! News Philippines may be viewed here.

ExpoScience is an annual gathering of Filipino scientists and science enthusiasts to celebrate National Science and Technology Week. The exhibit was held at the SMX Convention Center, Mall of Asia Complex, in Pasay City, from July 23 to 27, 2013. The 5-day celebration was themed Science, Technology and Innovation: The Road to a Smarter Philippines.