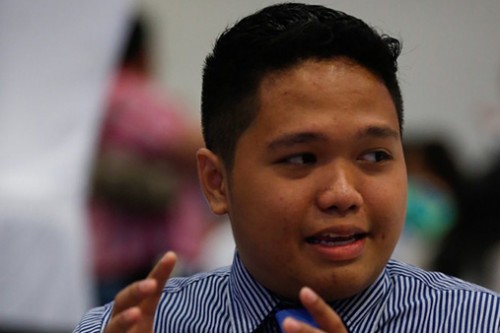 MANILA, They say that there’s money in trash. Riel Gomez found something similar. Was it a stroke of luck? Whatever it was he found his ticket to an ‘unexpected’ good fortune in the trash.

‘Unexpected’ was how he described it because just five years ago he was a boy without dreams, a boy whose only ambition was to survive the next day.

College for him was a far fetched dream because in reality, his mother couldn’t afford to send him to one anyway, he said.

In high school, he tried to support himself by selling ‘ice tubig’ and ‘ice candy’ to his classmates to unburden his mother. He also became a ‘kalakal boy’ collecting scrap metal to sell to junkshops.

But a friend still urged him to at least try and apply for a scholarship. When he took the advice, he could no longer find any scholarship forms.

“Till one time, may nakausling papel na may ‘SM’ sa basura. Ito ata yung fini-fill-up nila,” he thought to himself.

After his high school graduation, he decided to return to Negros and work in a junkshop. But he soon found himself back in Manila after he got accepted as one of SM’s scholars.

Still, he worried about his daily expenses like his transportation fee from his home in Novaliches to his school, the Far Eastern University East Asia College, now known as FEU Institute of Technology or FEU Tech, on Nicanor Reyes St. (Morayta).

While finding ways to cut down expenses, Gomez was also busy studying hard. He participated in college extracurricular activities and even managed to set up a school organization.

Another big break came during his third year in college when he was offered the Study Abroad Program in Kaohsiung, Taiwan. The four-month program allowed him to study any course that the university was offering at that time.

It was that opportunity that paved the way for him to save. And combined with the money that his mother saved, they were able to buy a lot in Caloocan where their house now stands.

His advice to students is to learn to dream and take action in making that dream a reality.

Gomez, along with 219 other SM scholar-graduates, gathered together on Wednesday to personally meet and thank SM Founder Henry Sy Sr. and his family.