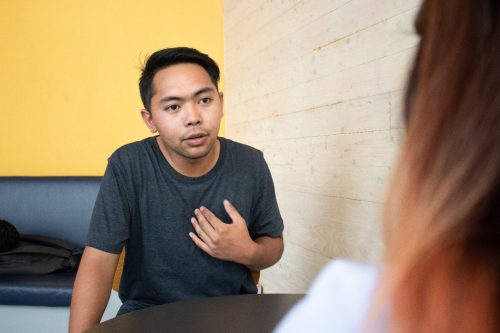 A former member of The Innovator, FEU Tech’s official media organization, is now making a name in Los Angeles, California as a street photographer.

John Alperr Padiernos says that while his street photography is now starting to gain recognition abroad, he struggled and had to pull out all the stops.

“I struggled to build my network. It was not my homeland so I was treated differently,” he said.But this did not stop him from chasing his dreams. Instead, he used his experience as The Innovator’s senior photographer to overcome those challenges. Alperr started looking for circles of photographers and various organizations so he can show them his photography skills.

He credits his stint at the media organization for giving him the confidence to put himself out there and deal with different kinds of people. “Being with The Innovator taught me to communicate. I had to coordinate with members from different designations, as well as people from various organizations. It improved my ability to express my thoughts and how to work with a team,” Padiernos said.

But even as his network expanded, Padiernos still did not get his dream gig. He first worked as a restaurant photographer then a photo booth attendant and later on, a wedding photographer.

“I started small but I made sure that people saw the value and quality of what I do. I did everything without complaining. Later on, people started approaching me for collaborations and sponsorships.”

Today, he has a full-time job as a graphic artist but still makes time for his passion–photography. His works have been featured on These Streets Magazine and were exhibited at the Fragile Art Collective in California

Padiernos also received the award for one of the 30 Great Photos by Pinoy Photographers.

“Do not stop pursuing your passion for the arts. Do not listen to the voices that say that there is no money in the arts. It is actually in demand in today’s digital world. You can see artists’ works in ads on various media platforms.”