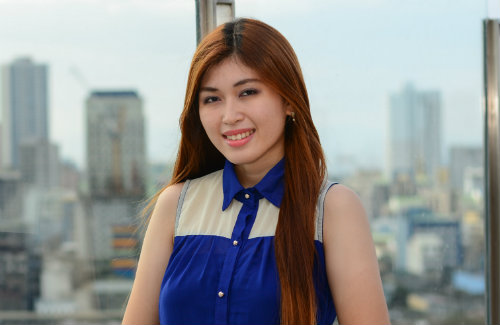 Alianna Tan is a tough girl with a lot of energy and passion, and, when she puts her mind to accomplishing something,she’s all business. But, most of all, she’s friendly, well-read, and knowledgeable of a lot of things, and was a former member of The Innovator. It was great meeting one of our own again.

While at FEU Tech, Yanna (her nickname) was an extremely active student, one who had many roles on campus. She was ascholar, a writer, a poet, a keynote speaker, an essay contest winner, a pageant queen (2012 iTam Ambassador), a 1st runner-up winner at a national pageant for engineers, a national oratorical completion contestant, a Leadership Award winner the list goes on and on.

She’s definitely no wallflower, but, according to Yanna, she was a bit of an introvert as a youth, and it wasn’t until her more formative years did she become more outgoing and competitive, especially with grades. She graduated salutatorian from preparatory school and valedictorian from high school. I was very focused on academics. You could call me a bookworm. I didn’t have many friends! But I definitely came out of my shell during college. she says, laughing.

When she joined FEU Tech, she received the President Scholarship, which covered all tuition costs and provides a monthly allowance. If not for my scholarship, I don’t think I could’ve pursued my dream of being an engineer, the former FEU Tech student shares. I chose Computer Engineering because I really found it innovative and in demand. Even when things got difficult at times, I refused to quit. If you really want something, the whole universe conspires with you become unstoppable.

Shortly after graduation, Yanna was hired as an Incident Management Analyst for Chevron, one of the world’s biggest energycompanies. In her spare time, she continues to write and hopes to inspire others with words.

Check out her blog for more about the amazing Yanna (aliannatan.tumblr.com)