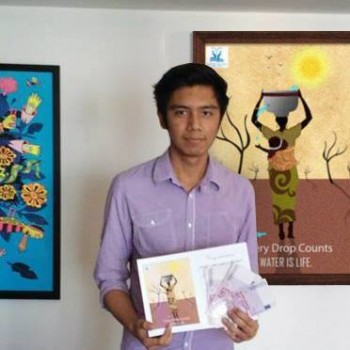 A 19-year-old student from the Far Eastern University placed third in an international student poster-making competition held in Berlin in observance of the United Nations World Water Day last March 23, a news release from the Department of Foreign Affairs (DFA) said.

Jhaimarr San Miguel of the FEU-Institute of Technology was the lone representative from the Philippines for the competition dubbed “Water is Life 2015,” sponsored by the German Sanitation, Heating and Air Conditioning Association (ZVSHK).

San Miguel, who bested more than 4,800 student-artists from 81 countries, told the Philippine Embassy in Berlin that it was only his second time submitting to a graphics design competition.

His poster followed the event’s challenge for “creating a poster that called out for a more responsible approach to water consumption and for raising awareness on the need for access to drinking water as it affects the health of more than 1.8 billion people worldwide.”

According to San Miguel, the competition served as a reminder about the importance of water as a resource and that “every drop counts.”