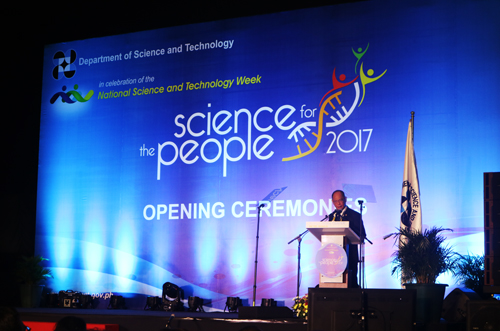 NSTW is an annual event held to recognize and showcase the achievements and significant work-in-process of Filipino innovators. This year's theme; Science for the People highlights the practical use of various technological products and researches.

FEU Tech was among the exhibitors at NSTW where it showcased three of the most remarkable student projects, including Apotheon; A game created by Animation and Game Development Students; Chessbot, a Microcontroller-Based Chess Playing Robotic Arm developed by Computer Engineering students; and iTam Mobile 2.0, a battery-electric vehicle made by electrical engineering students, which was also the FEU Tech's entry during the 2017 Shell Eco-Marathon Asia held in Singapore.

IMG_9789 forwebsiteHundreds of students, professionals, scholars, industry representatives and technology enthusiasts attended the NSTW and visited the booth of FEU Tech. One of which was the cast of Matanglawin, an educational show of ABS-CBN.

Intrigued with the Chessbot project, TV host Kim Atienza interviewed one of the proponents of the project; Isiah James IJ Puzon, and even played with the chessbot. This innovation is an Artificial Intelligence (AI) enabled robot that functions through the commands given by a chess android application.

Through NSTW, interactive exhibits, forums and talks were made possible. FEU Tech is positive that more young minds will be encouraged to come up with innovations that will further contribute to education and national development.

"As we adapt the principle of Technology Driven By Innovation at FEU Tech, we are one with DOST in celebrating Filipino innovations. Let us continue to uncover the great minds of our people, and generate innovations," says Benson T. Tan, FEU Tech Executive Director.