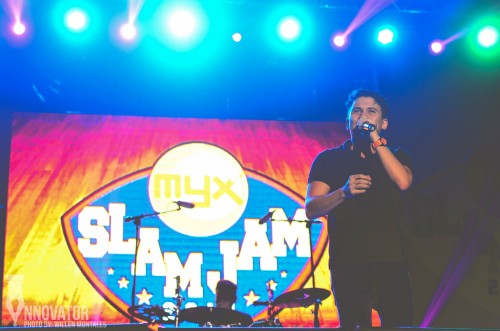 FEU Tech and FEU Main came together last August 15 at the FEU Grandstand when MYX, in coordination with FEU Tech and its Student Coordinating Council, brought to both schools MYX Slam Jam 2014, hosted by MYX VJs Chino, Ai, Gianna, Luigi and Vieo.

Headliners of the night were Philippine rock bands 6cyclemind, Spongecola, and Mayonnaise. These performers made the audience (especially the girls!) scream at the top of their lungs and made the night unforgettable for every iTam and Tam there.

Young JV also returned for a second performance after appearing earlier this year at iTam Night (another star studded concert, which featured Yeng Constantino, among others). Young JV was excited to see the iTams again, tweeting a few hours earlier: "Let’s rock tonight FEU for #myxslamjam we on the way!!:)"

The success of MYX Slam Jam 2014 was trending on all major social networks, including Facebook and Twitter, under #?MYXSlamJam:

"Can’t get over what happened yesterday at #?MYXSlamJam".

"Just got home from MYX Concert. Congrats FEU Tech and MYX PH! We had so much fun! #?MyxSlamJam #?FEUTechMyxSlamJam"

Thanks to MYX, FEU Tech, and FEU Tech Student Coordinating Council, the FEU community had a blast rocking the night away!