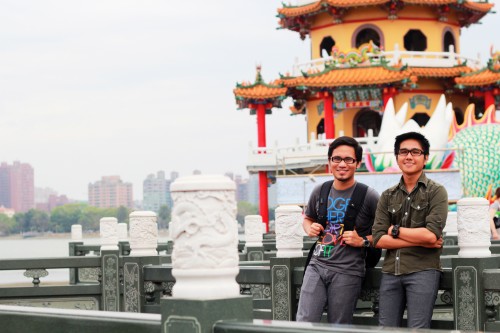 When FEU Tech students Mark Leocis O. Miguel and Marlon D. Quijano came back from their Study Abroad at National Sun Yat-sen University in Taiwan, not only did they bring great stories to tell, but they also brought Taiwan shaved into the sides of their heads. Keep reading to find out what that means.

Miggy is 21 years old. He describes himself as an adventurous guy. He loves tourist spots and traveling. For Miggy, the experience of studying abroad was life changing:

"I was in a different world. It really changed my perspective on life. I saw so many things, and learned so many things. It was all so amazing. And, because I was in such a different culture from my own, I really got to look at myself in a deeper way. I looked at who I was, where I came from, and who I wanted to become. It was my own journey of self-discovery." And sometimes the journey was about literal discovery, too:

"We [he and Marlon] would get lost all the time because we weren't used to getting around yet. But people were very nice, and helped us find our way. Our guardian would get mad us, though, for getting lost so often!" he says, jokingly. Their guardian, Peithe Salva, is an FEU faculty member who's currently in Taiwan, finishing his Ph.D. He acts as a conduit between the College and National Sun Yat-sen, and helps take care of our study abroad students.

"We really owe him a lot," said Miggy.

Marlon is 20 years old. He describes himself as fearless, and is willing to try almost anything. For Marlon, the trip was a huge leap forward in his life, too:

"I was able to make friends from other nationalities. You know, make international connections. I also experienced authentic Taiwanese culture, it really changed me. My habits changed. I feel like a different person, with a different outlook on life and the world."

Aside from Electronics Engineering courses, Miggy and Marlon were given the opportunity to take management courses while at Sun Yat-sen, the university's management program is ranked 1st in the southern part of Taiwan, and 3rd overall in the country. They took three courses: Cross Cultural Leadership and Communication, Leadership and Decision Making, Organization Theory and Behavior.

"The classes were diverse, and we were able to mingle with different cultures. We were given a chance to understand our own management skills and get more training. We met people from France, Singapore, the Czech Republic, Canada, Korea, our network of friends and connections really expanded," said Marlon.

One of the highlights of their experiences, according to both Miggy and Marlon, was getting the chance to be speakers at a seminar on the importance of the English Language in a cross-cultural world, held at Cheng Shiu University, one of Taiwan's most prestigious universities. The seminar's facilitator was their guardian Peithe Salva.

"We got to be speakers at this big conference. We spoke about cultural differences between the Philippines and Taiwan. We talked about learning and speaking English. Everyone was amazed at our communication skills. We were very proud!" said Miggy.

When asked about any problems or complications resulting from the political conflicts between Taiwan and the Philippines, both Miggy and Marlon shrugged them off. "No one even really mentioned anything. Everyone was fine, and we really didn't have any problems getting along."

Finally, when asked if the two had anything left to add, they both said that they regret changing their hairstyles. We must admit, the Innovator staff couldn't help but stare a little bit.

"In Taiwan, it's kind of a trend to get designs shaved into the sides of your head. Our Taiwanese friends convinced us to do it. It was fine while we were there, I guess, but I'm going to get a new haircut as soon as I can!" Miggy said, laughing.

Miggy and Marlon are just two of the many iTamaraws who have gone abroad and have had life-changing experiences. You can be just like them!

Grand Expansion: Tech to the Power of…