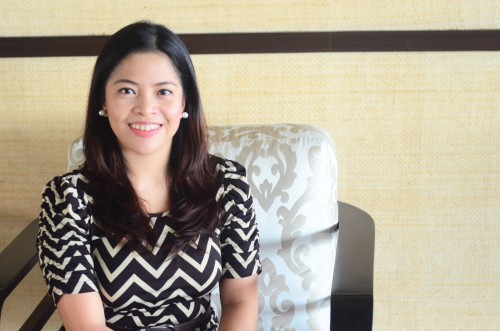 Ivy Carissa Dela Cruz is a bright, cheerful young lady with the same perky exuberance of a kid on Christmas morning. During our interview, she was so much fun that we almost forgot to ask her any of our prepared questions. Ivy really does show that being successful can also be a lot of fun. She's definitely in a league of her own.

But Ivy wasn't always a smiling success. She came from humble beginnings, and, at times, the future looked grim for her: "Sometimes the happiest people have the saddest stories," Ivy said of her childhood. Nevertheless, she worked hard, studied diligently, and was able to graduate Salutatorian from Torres High School, a public school in Tondo, Manila.

"My parents used to say, 'Anak, edukasyon lang ang maipapamana namin sayo,' or 'Child, education is your only inheritance.' So, I thought that I really needed to be the best that I could be, because education would be my only treasure."

She knew that she needed to go to college, but she also knew that Manila's more prominent colleges were quite expensive. Even taking their entrance exams could be pricey. She wasn't sure what to do.

Her financial problems were solved, however, in 2004, when Ivy found her way to FEU Tech and took their free entrance exam. Not only was she accepted, but the College also awarded her an Academic Scholarship and an SM Foundation Scholarship. She could get an education, and the school would shoulder most of the cost.

"I was only able to study at FEU Tech because of my scholarship. I was thankful for this blessing that God had given me."

Her life at the College quickly became a time for learning, but not just from teachers or books. She also learned about the necessity of gaining experience and being "uncomfortable."

"FEU Tech taught me to get out of my comfort zone," said Ivy about being successful. "It's about finding experiences."

She took the idea of being "uncomfortable" to heart. She explained that she used to be a naturally shy person, but was able to break out of her comfort zone during college and become an active, outgoing student, even going so far as becoming Student Coordinating Council President, from 2006-2008. She also worked part-time on weekends to take care of personal expenses and make some pocket money. In her fourth year, she took a big initiative and went to an FEU Tech sponsored career fair, where she landed a paid internship with Sykes Enterprises, one of the College's industry partners. And, despite her extra-curricular load, Ivy still managed to graduate magna cum laude, in 2008, earning her BS in Computer Engineering.

When Ivy's time at FEU Tech came to an end, it didn't take long for her to receive job offers, including a high-paying position at Chevron, an American multinational energy corporation and, according to Forbes Magazine, America's third largest corporation overall.

"During my college days, I always saw myself working for a multinational company, with a good salary. And it actually happened, less than two months after graduating from college. I started with [Chevron]. The company compensation was really great!"

Ivy is now a director at UHS, a pharmaceutical company in Makati. She has traveled the world, having visited exotic places like Fiji and Israel (for a Holy Land Pilgrimage). She enjoys reading, studying, and doing community service. Last April, she was featured in KERYGMA Magazine, the largest Catholic publication in the Philippines. She is also interested in real estate investment and owns property in Taguig City, where she currently resides in an upscale condominium complex. When asked about this last accomplishment, Ivy said proudly, "For 25 years, my mom has worked as a public school teacher, but we never had our own house until now."

Finally, when asked to give advice to our 4th year students at FEU Tech, Ivy smiled broadly: "Don't compete with others. Compete with yourself. Be in a league of your own."