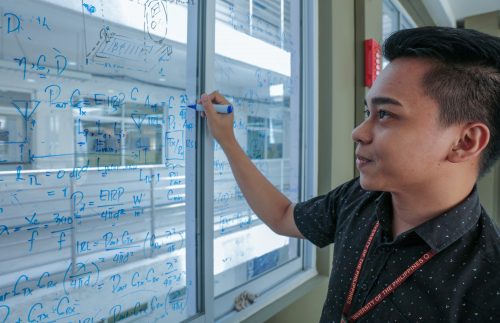 On June 29, 2018, a peculiar little satellite was launched into space aboard a Falcon 9 rocket in Florida, USA. As far as Philippine satellites go, space enthusiasts are familiar with the balikbayan box-sized class of microsatellites like Diwata-1 and Diwata-2. But this nanosatellite, Maya-1 was even smaller.

Created by Filipino scholars Adrian Salces and Joven Javier as part of the Kyushu Institute of Technology’s (KyuTech) Birds-2 project, Maya-1 tipped the scales at barely over a kilogram, while carrying hardware that could facilitate communication in disaster scenarios. It was the first Filipino built nanosatellite and would be an inspiration for future developments in the Philippines.

A few years ago it was difficult to imagine us Filipinos having our own satellites, let alone having qualified personnel to build them. But with the success of Maya-1, as well as the Diwata microsatelllites, the UP and the Department of Science and Technology-funded STAMINA4Space program (formerly PHL-Microsat) have launched a project that will develop this future crop of satellite builders.

The name of the project is STeP-UP, and its scholars will not only be trained to build satellites like Maya-1, but they will also be doing almost all their work inhouse.

At the centerpiece of the STeP-UP project (short for Space Science Proliferation through University Partnerships) is the Masters in Engineering program at UP’s Electrical and Electronics Engineering Institute (EEEI). With support from the STeP-UP program, the Institute is now offering its first two-year graduate track on nanosatellite engineering.

Eight DOST-funded scholars from different backgrounds and institutions passed the gruelling screening process to become part of the pioneering batch this 2019. Their mission to be able to create two 10x10x10 cm. nanosatellites at the end of their study period. All the design and construction work will be done at the Institute, with Kyutech helping with space environment testing in preparation for the launch of the satellites at the International Space Station (ISS).

According to STeP-UP head, Engr. Paul Jason Co, the project is about passing on what their team has learned to partners in the academe back home. “We have to proliferate all this knowledge across the country,” he said. “If only the same sets of people are the ones working on space technology, that would be a waste.”

With the graduate program track on nanosatellite engineering, the STeP-UP project through the Institute can get to engage with other universities on the way to creating a university consortium for space technology. Members of that consortium will share in the satellite-building capacities that STAMINA4Space has pioneered; while UP and its STeP-UP partners will also develop ground stations in these universities to manage the nanosatellites they build.

Why nanosatellites or “cubesats”? “For one thing, cubesats are very small,” Co said. Unlike microsatellites like Diwata or their more enormous brethren, these satellites are much cheaper to build.

And, he continued, since it’s a small system, it’s a perfect fit for learning about this technology. For bigger satellites, it will take years, even decades to develop one of them. The nanosatellite, on the other hand, fits neatly within the two years allotted to the postgraduate students to produce them.

STeP-UP scholar Gladys Bajaro had been working on satellites even before the program was launched. In fact, this graduate of Electronics and Communications Engineering from Bicol State College of Applied Science and Technology played a key role in the success of the country’s initial forays into satellite technology.

As lead engineer of the amateur radio and satellite station at the EEEI, Bajaro applied her skills to tracking Maya-1 and helping out on Diwata-2’s amateur radio unit. Still, despite her experience, none of her previous feats truly prepared Bajaro for the holistic training required to build a satellite from scratch.

Bajaro detailed the three courses she and her classmates are taking in their first semester. First, we have satellite communications, she said, which tackles the basics of how satellites can converse with ground stations on Earth. The second is a course on nanosatellite development, which covers the process of building the different subsystems, from the circuits to the antenna, of a satellite like Maya-1.

Finally, each semester has a Directed Studies course, where the students engage in hands-on experiments and testing to prepare them for the final output. This focused course handles topics that regular classes barely touch on, like planning satellite missions and prototype making, and where students get to ‘learn by doing’.

With space technology being in its infancy in the Philippines, there is a lot of pressure resting on the shoulders of the scholars, according to former Far Eastern University (FEU) Institute of Technology faculty member Bryan Custodio. The licensed engineer used to teach courses in Electronics and Communications Engineering until a letter from UP to his institution launched his journey as FEU’s representative to the program, an honor he takes very seriously.

“The application was tough,” he said, “because this is UP Diliman. But when I read the results and I learned that I passed, I was speechless. Because I never thought they would put their faith in me to be a part of this program.”

As a scholar, Custodio is being trained to be a well-rounded engineer, rather than a narrow specialist. “In my case, my assigned subsystem is the antenna subsystem, with some involvement in the communication subsystem,” he said. But without much precedent literature to guide them, he and his classmates are learning bits of every subsystem and process. “Every day is an opportunity to learn something new.”

Like Bajaro and his fellow scholars, Custodio aims to give back to the country through research and helping to build the proposed Philippine Space Agency. “Hopefully we, the pioneering batch, can continue what we learned through that Space Agency. And I hope I can get to teach the next generation, the next batch of scholars who will develop satellites and work on other aspects of space technology,” he continued.

While STeP-UP scholars like Bajaro and Custodio entered the program with highly varied skillsets, Co believes that diversity is the group’s strength. In fact, he encourages any prospective student with a background in science or engineering to apply for the next scholarship cycle. “If you know the scientific method, you’re welcome.”

He compares their training philosophy to STAMINA4Space program leader Dr. Joel Joseph Marciano, Jr.’s intent to build “T-shaped people”. “We have different students that bring their own expertise,” he explained,  and that’s the vertical pillar. But since developing a satellite is a multidisciplinary task, we expect them to reach out and learn other aspects as well.

Co gives the example of an electronics engineer who expands his or her focus once accepted into the program. You don’t restrict yourself to just electronics. You learn the physics side, the mechanical engineering side, the materials side. Basically, the whole thing.

That’s what we expect our graduates to be. They may come in as, say, mechanical engineers or computer engineers. But when they graduate, we expect them to be systems engineers, he continued.

While funding for the program lasts for four years, Co hopes that this experiment will blossom into something bigger. “We want this to continue offering this program. We want other universities to build their own satellite-building programs.”

“These scholars, they are the seeds,” he said. “We want them to grow and spread their own seeds, until we have a critical mass of researchers for us to sustain a local space industry.”

Original article posted on UP Diliman