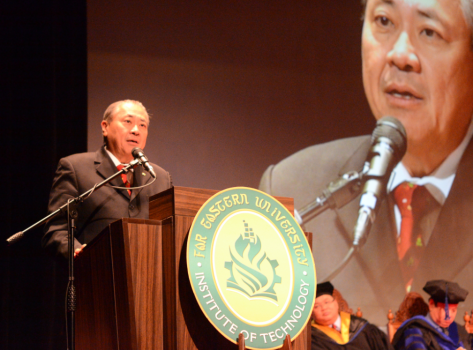 Happiness is the true measure of success.

This was emphasized by Bayan Automotive Industries Corp. President and CEO George Chua during his speech at the 50th Commencement Exercises of FEU Tech held at the FEU Auditorium.

Chua, who addressed the 273 graduates from Engineering and Computer Studies, said that in order to attain happiness, one must work S.M.A.R.T., which stands for saving, motivation, action, reputation, and time. 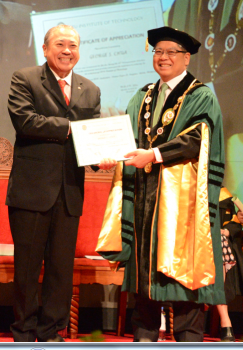 Starting to save at an early age is important because one's cash flow slows down or stops with time. In order to save, it is important that one lives only within his means.

"Life is not a sprint, but rather a marathon where you go through different stages in your life. When you are young, you are building up your earnings, but there will come a time that it will stop or slow down due to old age and retirement," Chua explained.

"Without motivation, your productivity suffers; the quality of your work suffers," he said.

The third letter stands for action, which he said serves as a beacon to the people who look up to you for guidance and inspiration.

"To be effective, you need to turn your thoughts into actions. You may have great ideas and good intentions but you need to turn them into reality," Chua reiterated. "The right action is to do what you say and say what you think. Obviously, your actions must be well-timed and well planned and thought out."

The positive type of reputation is what the fourth letter stands for. Reputation will be built as one goes through life so it is important to "be honest, reliable, capable, competent, a man of principle, and being known to be good or even best at what you do."

"The bad things you do stay with you forever. Once you wreck your name, it is very difficult to recover from it," he said.

The last element is time. Chua believes that it is the most important, but people take it for granted. He reminded the graduates to always be on time as it is a sign of respect for other people and themselves.

"It has been said that time flies when you are having fun, which means time is too short. But on the other hand, all good things come to those who wait, which means you should have patience. One thing is certain though, time waits for no man," he ended.

George S. Chua graduated with a degree in Mechanical & Industrial Management Engineering at the De La Salle University. Four years later, he completed his Master's Degree in Business Administration, Major in Finance and Management at Wharton, University of Pennsylvania where he got a formal education in business. He is currently the President of the Federation of Philippine Industries and gained prominence as President & CEO of Bayan Automotive Industries Corporation, a Filipino-owned company with 60-year experience in the local automotive industry.