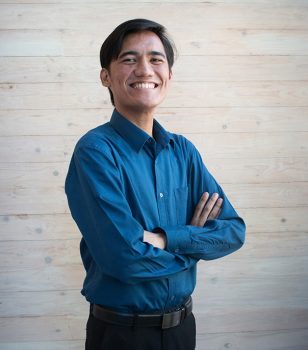 Mark Eullysis Alzaga, Eully to friends, is the April 2018 Electronics Engineering Board Exam topnotcher. Among its 1,208 passers, he ranked number one with a rating of 93.3 percent. The road to his success was riddled with obstacles and disappointments, but Eully chose to be brave and faced each one head on.

Citing a soft spot for stray dogs, Eully was determined to be a veterinarian for most of his childhood. But on his fourth year in high school Eully had an epiphany. "Thanks to my high school teacher I discovered the beauty of Physics, electronics and circuits especially. I had a change of heart and decided to become an Engineer instead."

Excited and eager, Eully gratefully accepted the President's Scholarship grant from FEU Tech and took up Electronics and Communications Engineering, the field of engineering which entails the most use of mathematics. Although armed with notable numbers skills, Eully realized later on how ill-equipped he was to pass all his subjects. He struggled to maintain his grades at first until eventually, he lost his scholarship.

Instead of immediately running back home and asking his parents for help, Eully found a way to continue his education on his own- joining and winning in quiz competitions. "I did not want to tell my family that I lost the scholarship. I knew they would be as heartbroken as I was. What I did was I saved the cash prizes that I won from various competitions to pay for my tuition. I only told them that I was no longer a scholar when I already ran out of money."

And then fate smiled on Eully. After asking for help from FEU Tech, Eully was given another chance at a scholarship grant. He looked back with gratitude at how FEU Tech made an impossible thing happen. "They believed in me and so I promised myself I will not let them down again."

His father, a government employee and his mother, a housewife were ready to help their eldest child but Eully refused to burden his parents further. Even with the grant, he took a part-time job to help pay for school expenses. It was physically draining but Eully was determined to graduate even if it meant studying and working at the same time. "I worked part time at a review center teaching math and physics until I graduated."

Luckily, Eully was absorbed by the company where he rendered his internship. Now, Eully had to learn to juggle work and review for the Boards.

"On the way to work, while inside the jeepney or as I waited for the train, I would organize my study plan, making a list of what I should be reading up on. So, when I have spare time at work, I would spend it reading books. This is when I learned to quit making excuses if I really want to pass the boards."

In February 2018, two months away from the exam. Eully resigned from work to focus on the review. He lived in a dorm together with two other friends Charles Pasion and Bryan Custodio to work as a team. All of them became topnotchers.

Eully has been receiving countless offers from various companies but admits he has yet to decide which field of electronics engineering he wants to venture in. But one thing is for sure, he will always embody the core values that FEU stands for.

"I will never forget Fortitude, Excellence, and Uprightness. I will keep this in mind at all times especially when I have to make the hard decisions in life."