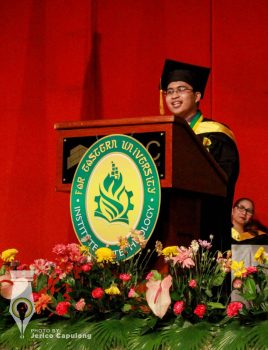 The tassel is worth the hassle for Robbie Del Rosario, an ITWMA student who led FEU Tech's 713 graduates during the 49th Commencement Exercises at the Philippine International Convention Center.

Without friends nor family beside him proved to be difficult at first. It also didn't help that he had no background on the course he chose. 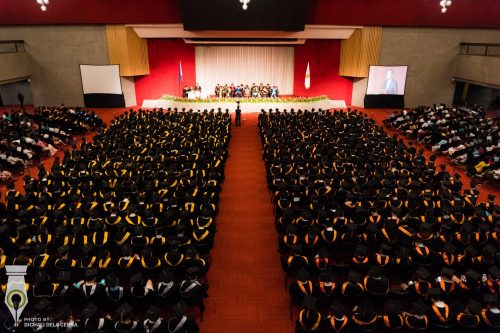 "But because of this, I was so excited every time our professor came in to teach us in programming class. I was so into it. I gave my all to learn every new thing. Then, I practiced and tried to apply all of my learnings to create something different. It became my passion. Something that could change my life and can help me have a good future."

He also looked back to the challenging phase of his life as a student his thesis days.

"In the last weeks of the development of our capstone project, we were swamped with school work. I was one of those stressed out and worried faces along the corridors."

But with the guidance of their professors, classmates, and family, Del Rosario was able to overcome these struggles.

He also shared that one of the greatest leaps he took was when he was called to serve a ministry. Although there was hesitation because it might affect his academics, he followed his calling nevertheless and received a sweet surprise.

"The final term was not easy; it tested me. But to my surprise, that was when I received my highest grades. The grades that made me your speaker today. Truly, God is amazing! Matthew 6:33 I chose to serve, and He blessed me more than what I expected. I didn't expect to graduate with Latin honors but I prayed for it."

He also encouraged his batchmates to be brave in facing the new chapter in their life.

"Class of 2018, we have faced and conquered so much challenges and struggles just to reach this point of our lives. We have fought our own battles. Maybe, some of us once thought of giving up at some point, but what matters the most is that we all chose to continue and finish the race. We all know that this is just the beginning of the real battle."