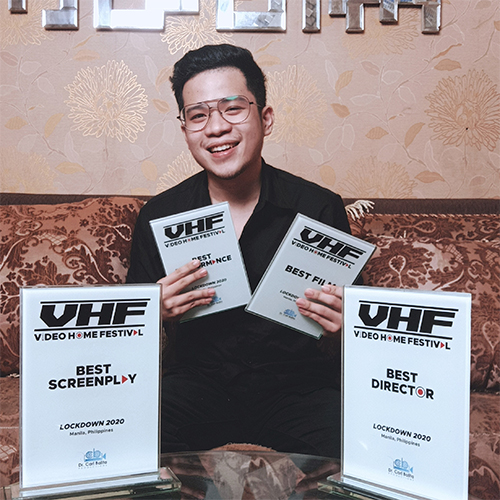 Ken Leviste recalls it as a surreal moment when he took that unexpected video call from the organizers of Sine Siklab 2020. Clad casually in a blue t-shirt with his earphones plugged-in, he was visibly unprepared to receive the good news that he won “Best Actor” for his entry Last Sem Na Ni Peter. But the organizers delivered an even bigger surprise to the 21-year-old filmmaker; apart from the acting award, his film had also won “Best Picture”.

Meanwhile, Ken is still in disbelief with his string of successes. “I am very overwhelmed; from friends, family to prominent people - all of them are saying they are proud of me. The story of our hardships has  now become one of inspiration.”

Banking only on his purpose, his skills, and his passion, Ken persevered to tell the story of a student struggling and overcoming obstacles to graduate amid the pandemic with Last Sem Na Ni Peter. “The plot was personal. It was inspired by my own frustrations over my delayed graduation because of the pandemic.”

Working with a limited budget, with no fancy equipment, and no other staff and crew apart from his sister, Kim, he produced Last Sem Na Ni Peter in June. More than the lack of equipment, shooting scenes during the lockdown proved to be a bigger challenge. Left with no choice, Ken and Kim took on multiple roles and even asked their real-life mother to play his reel mother.

“For me, these challenges make us better filmmakers. Yes, we might have been the underdog. But even though our resources were limited, our passion for this film was limitless. That’s why even if our competitors had a much bigger edge in terms of budget and production, we still fought very hard to win and thank God we did.”

Ken always had a passion for multimedia arts.

“Since high school, I have always been interested in multimedia arts, so I wanted to pursue a college degree that will develop my skills. Thanks to FEU Tech and the generous scholarship they offered me, I was able to take up Multimedia Arts.”

Ken has been an academic and CHED scholar for four straight years now. He has also served as a Film Guild Leader and Auditor in FEU Tech’s Tribe of EMC and Multimedia Arts Students.

It was here at FEU Tech that Ken met one of his teammates, Karl Aerron Bauer, who inspired him to dream big while keeping both feet on the ground.

“For me, (Karl) he is one of the best Multimedia Artists in FEU. He taught me to become a better artist as well as a better person. I’ve learned humility from him to keep my feet on the ground. Since he wants to be an international VFX Artist, he has motivated me to pursue a bigger goal as well: from a local filmmaker to an international Film Director.”

Apart from Karl, Ken met other hardworking Tamaraws who shared his passion for filmmaking. Soon enough, they were able to establish their own production house, Arkos Digital.